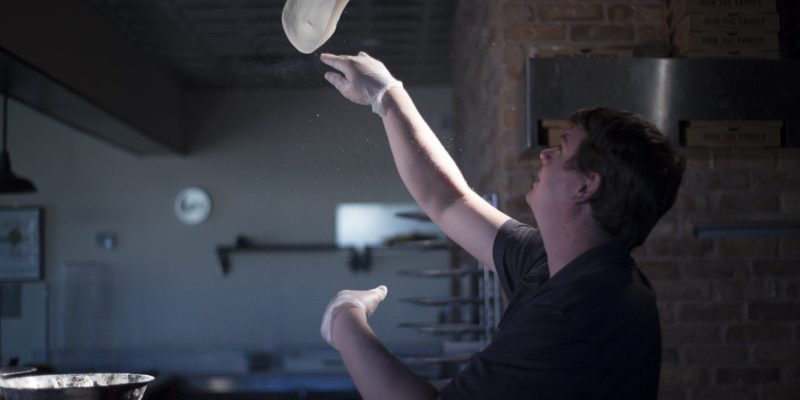 After Crafting the Best Pizza in the Eastern U.S., French Will Compete Head-to-Head with 600 Chefs from Around the World.

Back in October 2015, Drew French, the founder of Your Pie, the original down-the-line pizza concept, was faced with a delicious challenge craft the best pizza in the Eastern United States. The venue was the 2015 Pizzaiolo Ultisimo at The Sofo Foods Expo in Atlanta, and French had to compete against hundreds of restaurants in an effort to wow a panel of nine discriminating judges. Using fresh Georgia peaches, hand-tossed dough, prosciutto and a honey-balsamic glaze, French created the winning pie. The victory earned him a spot on the esteemed Groupon U.S. Pizza Team, and the chance to compete in the 2016 World Pizza Championship in Parma, Italy on April 11-13.

This will be the 25th anniversary of the world’s most prestigious gathering of pizza virtuosos, and it’ll mark the 16th year that PMQ Pizza Magazine has organized a competitive U.S. team. On that team are French and 16 other chefs, who will represent pizzerias from New York City to Tucson, Arizona. In total, more than 600 competitors from around the world will descend upon the Viale dele Esposizoni to test their cooking and dough-handling skills, filling the arena with the sights, sounds and smells of intense pizza combat.

“I’m proud and very humbled to be the Georgia-raised boy who’s now competing against world-renowned Italian pizza masters,” French said. “My plan is simple’ have fun, make something unique and win. This whole experience is going to be very surreal.”

When the team arrives in Italy on April 9, they will be tasked with shopping the local market for ingredients. But ask French what kind of concoction he’s been scheming, and he’ll only reveal a simple clue: “Think seasonal and local.” French’s method is to embrace spontaneity, but there are still a few staples he knows he’ll be stocking up on: Parmesan cheese, prosciutto and balsamic vinegar.

French will be competing in the “Classico” category alongside his wife, Natalie, in the”Pizza for Two” challenge. For the husband and wife duo, having the opportunity to craft pizza in Italy is fitting Natalie’s family is from the island of Ischia, which is off the coast of Naples. The country is the inspiration behind Your Pie, too. It was during their honeymoon in Ischia, almost ten years to the date of this trip, that French fell in love with the region’s use of brick ovens, and the perfectly-crisp doughs and smoky, earthy flavors that came out of it. Inspired, French took the humbling experience home with him, and once his feet were planted back on American soil, he put himself to work. Shortly after, Your Pie was born…