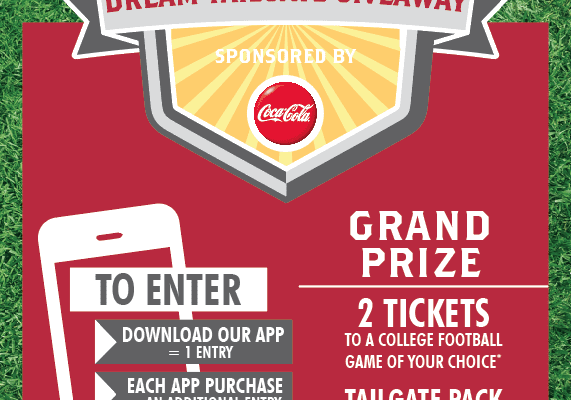 Football season is officially here, and in the spirit of winning (GO TEAM!) Your Pie has collaborated with partners like Coca-Cola, Dogfish Head brews and more to provide one lucky fan with a Dream Tailgate Package, including:

To be eligible to win, readers must to download and use the Your Pie app between Aug. 31 and October 12. The winner will be announced on October 13.

Contest Dates: The Dream Tailgate Giveaway contest begins Thursday, August 31, 2017 and ends Thursday, October 12, 2017 at Midnight. One winner will be randomly selected and contacted based on the information they provide on Friday, October 13, 2017.

Contest Details: Download or use the Your Pie Loyalty App during the Contest Dates to be entered to win the Dream Tailgate Giveaway contest. All prizes will be shipped to the winner on or before November 1, 2017. By entering the contest, entrants agree to the terms, conditions, and rules listed in the Your Pie Franchising, LLC Complete Official Rules.