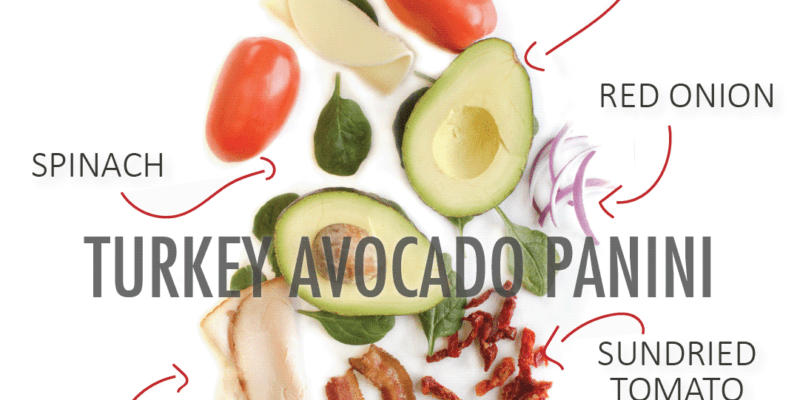 Your Pie, the fast casual down-the-line pizza originator, is cooking up a new push for flavor with the launch of its latest Craft Series offering, the Turkey Avocado Panini. For years the Craft Series has highlighted different flavors and ingredients on hot out of the oven pizzas. This time around Your Pie decided it was time to highlight another popular item on the menu, the panini. The Turkey Avocado Panini will take flame fired flavor to a new level when it hits Your Pie locations nationwide on March 22.

“Highlighting a panini is something we haven’t done as part of our Craft Series before,” said Drew French, founder of Your Pie. “We know our customers love paninis, but they often don’t get enough love on our menu. It’s time to give paninis the spotlight for a while and bring a new level of flavor to our already diverse spring menu.”

The Turkey Avocado Panini starts with freshly baked panini bread, made from Your Pie’s pizza dough, slathered in Sundried Tomato Aioli and a fresh avocado spread, both prepared in house each day. The panini is then topped with a generous portion of Your Pie’s new hand-carved turkey, which is humanely raised on family farms with no antibiotics or hormones added. The final steps include topping the panini off with crispy bacon, fresh spinach and tomatoes, red onion, and melted provolone cheese.

Your Pie is also offering a full-bodied Root Beer Float as a sweet compliment to the savory panini. The smooth and crisp liquid treat is the perfect cherry on top to the flavorful sandwich. In addition, to continue the tradition of craft brewery partnerships through its Craft Series events, Your Pie is partnering with Atlanta-based SweetWater Brewing, offering several craft beer flavors that can be enjoyed with the panini.

“The new Turkey Avocado Panini features flavors that really match up with the start of spring,” said Grant Fox, Your Pie Purchasing and Supply Chain Manager. “The fresh taste of the avocados, turkey and sundried tomatoes coincide with the invigorating feeling of the first signs of spring.”

The Craft Pie Series has been a seasonal feature of the Your Pie menu since French opened the first fast-casual pizza concept in 2008, and since then, has included unique pizza creations like the Slider Pie, a spin on the classic American cheeseburger; the Peach Prosciutto Pizza, which featured fresh peaches, prosciutto and a honey balsamic glaze; and the Fresh Fiesta Pie, a deconstructed take on guacamole.

With the launch of the new Turkey Avocado Panini, Your Pie also continues to encourage each of its franchise locations to partner with a local charity of their choice as part of its Ins’pie’ering communities effort. To make a positive impact on local communities, a portion of craft series profits will be donated back to a local charity.

“We are thrilled to be able to introduce a new spin on these fresh flavors to our successful Craft Series,” French said. “While our pizza always comes first, we know that our customers love our paninis and we are excited to give them some well-deserved attention.”